At Mount Wachusett Community College green isn’t just one of their school colors, it’s a way of life. Since 1996, MWCC has been investing in green 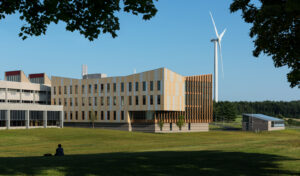 technology, reducing its carbon footprint, and decreasing its reliance on fossil fuels. The two wind turbines standing tall on the Gardner campus are the most visually impactful examples of the college’s commitment to combating climate change, but they are far from the only green tech being utilized at MWCC. This blog post is the first in a series highlighting MWCC’s efforts to implement renewable energy sources and combat the threat of climate change.

The core of MWCC’s green energy efforts is their biomass hydronic system, which has had a significant impact on the amount of electricity being used to heat the 450,000 square foot campus. Wood Biomass Energy is a renewable, clean, and economic energy source. It is a fantastic local alternative to traditional fossil fuels. Due to the abundance of woodland in North Central Massachusetts, MWCC has a sustainable supply of material to support its biomass system. By utilizing trimmings, industrial waste wood, as well as demolition and construction waste MWCC is lessening the burden these materials put on local landfills, reducing greenhouse gas buildup, and saving the college money. Additionally, by utilizing local resources for their wood, MWCC is investing in the community.

MWCC’s biomass system supplies the campus with 8 million BTU’s (British thermal unit) per hour, replacing 3.4 million KWH (kilowatt hours) of electricity required to heat the building. This translates into roughly $300,000 of savings per year, which is approximately 40% of the college’s energy budget prior to the implementation of the biomass system. Sustainability practices and investing in renewable energy sources are the only paths forward as the climate crisis worsens. MWCC has been ahead of the curve in both regards, and continue to invest in green technology and curriculum. We here at United Way of NCM feel privileged to be part of a college so clearly dedicated to the future of the community it serves.

If you enjoyed reading about this facet of MWCC’s green energy initiatives, be sure to check back! We will be going over the MWCC’s most prominent and photogenic renewable energy source – the wind turbines.